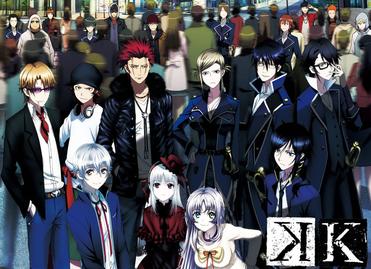 K-Project (or simply K ) is an anime series produced by the studio GoHands and a series of manga written by GoRa. There is also four light novel coming from the same series all written by GoRA. The anime series originally run between  October 2012 and December 2012. In 2014 the released a movie entitle K: The Missing King and between October 2015 and December 2015 the second season, K: Return of the King, was presented on television. The first season count thirteen episodes same goes for the second season.

“Kings” are individuals who have been bestowed with incredible supernatural powers and granted the ability to recruit others into their clans. Protecting the lives and honor of their clansmen is an integral part of the Kings’ duties. After a video depicting the heinous murder of a Red Clansman spreads virally, the unassuming student Yashiro Isana is accused of homicide. Now, a manhunt is underway for his head, bringing him into contact with the infamous “Black Dog” Kurou Yatogami—a skilled swordsman and martial artist determined to follow the wishes of his late master, the Seventh King.

Meanwhile, the current Red King, Mikoto Suou, faces his own imminent demise as the search for Yashiro narrows. But during Yashiro’s struggle to prove his innocence, a greater conspiracy is unraveling behind the scenes; clouds begin to appear in his memory, and close friends start to question his very existence. What began as a simple murder is now leading towards a full-blown war between Kings with the very fate of the world at stake.

I really enjoyed this series, even if it miss some information about that damn fucking Dresden Slate . I would really like to know where the plate from and don’t answer me Germany, cause I’m gonna kick you to the moon.

As I said I enjoy the series, I liked the character in general Anna is so freaking adorable and Fushimi is so damn hot. Really like the Blue (Reisi Munataka) and Red (Mikoto Suoh) king, but Saruhiko twisted mind wins. The fight scene are well designed and the animation in general is on point. I just can’t with the slate … I …just…can’t. Like that freaking rock is giving king power here and there but we have no freaking clue about why and how…that great….yes I’m a bit better about that fact and no I will not get over it BUT I did enjoyed the series really much. I read some comment about the fact the second season shouldn’t exist, but those people are wrong Anna is fabulous in it.

I did put picture of Fushimi and Yata on purpose and I’m not regretting it.

Normally here I would talk about the music…but to tell you the truth I don’t really remember munch about the background music, but I do remember about one of the insert song, which is also Anna character song: Requiem of Red…the song is so sad, feel like crying each time.

Would I recommend this series? Yes, I really enjoyed it, it’s not as good as some other action series I already watched, but it have a lot of good element that make me tell you to watch it.