Written by Manabu Kaminaga and produced by the studio Bee Train (Tsubasa Chronicle, Noir, .hack) the manga series is still ongoing and count 49 chapters so far. The anime tv show count thirteen episode and original aired from October 2010 to December 2010.

Haruka Ozawa’s sophomore year is getting seriously scary. One of her friends is possessed, another has committed suicide and Haruka could be the next one to flunk the still-breathing test. Her only way out of this potentially lethal dead end? Yakumo Saito, an enigmatic student born with a mysterious red eye that allows him to see and communicate with the dead. But the deceased don’t always desist and some killers are more than ready to kill again to keep dead men from telling any more tales. That doesn’t stop Haruka’s knack for digging up buried secrets, and there’s even more evidence of bodies being exhumed by both Yakumo’s police contact and an investigative journalist with a newly made corpse in her closet! Can this pair of anything but normal paranormal detectives solve the ultimate dead case files or will they end up in cold storage themselves?

I like the supernatural and the mystery genre, this series have both of it.
I was already reading the manga and I decide to give a look to the anime to see if I will enjoy it as much I as I enjoyed the manga. I did enjoy the series but still the manga is still ongoing, there is difference between the two medium, the studio had the wrap up the anime after all, but the way it finish, it let room to an other season (finger cross)

The series have a lot of interesting character, of course the main character is one of them. Yakumo Seito can be blunt, sarcastic and sometime condescending, but behind his cold demeanor he hide a gentle side, if you need help, you can ask him.

What I liked about this series is the two set of story. First you have the occasional case on usually brought by Haruka Ozama 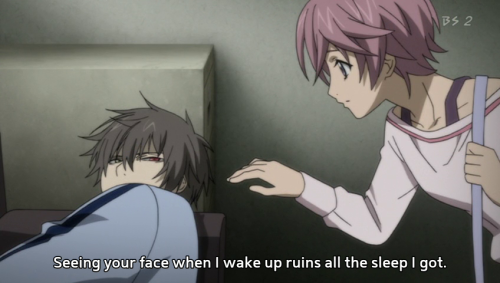 or Chief Gotou, it’s normally case related to the supernatural, possessed people or haunted place, and then you of the background liner story including Yakumo biological father. He don’t know much about his father, the anime series doesn’t say much and the manga didn’t gave a lot of information so far. But for some reason I think he is some kind of ghost or demon. One thing is sure about him, is that he is charismatic and can easily manipulate people around him.

Even if I found the series felt short and let space for more, I will still recommend it to people who like supernatural/ghost/mystery anime.