Wow is it really a Top not related to music ???
Yes I told you the last one was the Top 5 Anime Ending of the 2016 Fall Season until the next anime season.
Now, I was wondering which Top I should do, and I thought to start with a hard topic, The Death.

Anime fan saw countless character die. It could be from a natural way or they could have been murdered. Regardless of the way they died, a character death it’s always a scene to read or watch.

In this Top I will list The five death of anime character that affected me the most.

To be completely honest with you, I didn’t cry when Mikoto died, sure I was sad when I saw Munataka pierce the Red King with his sword. Mikoto was okay with it, he look peaceful when the Blue King killed him, he knew that his death was inevitable if we pushed himself like he did. Like him I was “okay” with it, that what he wanted. But Anna reaction followed by the insert song “Requiem of Red”, made everything more hard to watch and I start crying.

I watch the series a couple of time, and each time we get close to the scene where enforcer Masaoka died, I start to tear up. But it’s not as intense as some other character death. What really doesn’t help is what Masaoka tell his son, Ginoza, before passing away. His son always though his Father prefer Kogami over him, but Masaoka told him he was proud of him, that when he look into Ginoza eyes, He saw himself even he was younger. Tomomi Masaoka died to protect his son and that all what matter to him.

The event of the first season of the anime series K-Project happen after the death of Tatara Totsuka. So we doesn’t see the even leading to his death, but we have flash back of him dying. The reason why I include his death in this top is simply because his death not only unleash Mikoto wrath, but also it happen on Anna’s birthday. The Homra clansmen were all excited, trying to celebrated their little Princess birthday, Totsuka decide to go for a stroll and never come back. He had a calming effect around him. If you was near him, you had that peaceful feeling surrounding you. I was reading the manga, without knowing his death will occur soon, but soon as I realized it, I couldn’t hold back my tear. Tatara Totsuka was such a sweet character. 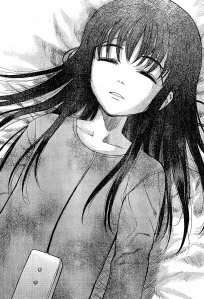 The reason why I’m so disappointed with the second season of the anime series Gunslinger Girl is because they didn’t let Angelica died. I sound horrible I know, being sad cause a character his still alive, but let me explain myself. Angelica death wasn’t an unnecessary one, it was a mean being it, it shown use the cyborg life span doesn’t last forever cause of all the conditioning the girl have to go through. That being said, why Ange death is on the second position it because of the moment before it happen, she was slowly regaining her memory of her dog, of the story her handler, Marco, was telling her. Her handler was by her side, she did leave the harsh world she leaved in peacefully, but watching her going away was really painful.

Not only is death his tragic, but his funeral make everything even worst. I just can’t watch it. I had seen that scene at least three times, in the 2003 anime version, the Brotherhood one and the manga, and I’m not counting the number of time I had to look for his funeral scene for blog post. Each time it’s the same, I just can’t watch it completely. Hughes death is awful and the reason why it happen it’s because the series needed a reason to push Roy to dig the dirty of the Military. The series will not have been the same if Hughes didn’t died so it needed to happen and need to be tragic, he could died in a simple car accident. That being said, why this death affect me so much, it’s probably cause I lost my father at a young age, I was older than Elicia and my dad died cause of cancer, but each time the scene remind me of the day my mother got the call when my father pass away.

While writing this post a lot of other death came into my mind, like Corteo‘s death in 91 Days or Yuki Funahara, Akane‘s friend, in Psycho-Pass, both death are tragic, one was kill by his best friend and the other was kill in front of her friend, and the latter couldn’t do anything. Just thinking about it make me sad. But his is a Top 5 not a top 7 so I had to cut somewhere. Maybe I should I do a Top 10 instead… Oh Well let’s cry altogether upon our character death!!

Now When you think of an anime character death, which one come into your mind?