Gunslinger Girl is a series that I quite enjoyed. While I didn’t finish to read the manga (I totally refuse to see Jose and Henrietta dying) I watch both season of the anime. I love the first season and was disappointed by the second one for a lot of reasons that can be read here and here

Henrietta is really adorable. She really do whatever she can to make her handler Jose Croce happy. She is one of the most spoiled cyborg. She adore Jose more than anything else.

Tri is like the big sister of the group. She is the oldest and even if she is really mature, she have a cute side. She have an impressive teddy bear collection name after the seven dwarfs of Snow White.

Rico is the tomboy of the group. Despite the fact Jean, her handler, is really harsh with her, she still like her life, cause it’s mean she is still alive. She can kill you while smiling.

Jose might not be the best handler cause e is a softy, but the way he treat Henrietta push her to do her best during the mission. 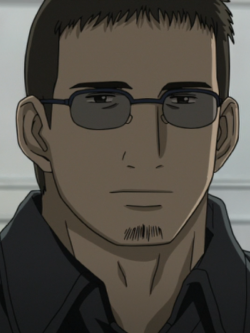 We doesn’t see him a lot and when he is appearing he arbor a bitter look. If I like him so much is cause of all what he did when he realize what was about to happen to Angelica, he try to make her life better when her end come. He was there by her side when she passed away.

He is Triela handler, he might not be as soft as Jose, but he is not harsh like Jean either. Hilshire is right in the middle. He knows Triela is just a tool, but he still treat her as a human being.

Pinocchio is the only good thing the second season gave us.

The only reason why I found him annoying it’s because he only sees Rico as a tools for his revenge. He does care, sometimes really not often, about her but most of the time he is really harsh with the little girl. He actually beat her sometimes.