Remi is a boy living happily with his mother in the French countryside. But everything changes when his estranged father comes home and, in desperate need of money, reveals that Remi is adopted, and sells him. Heartbroken, Remi ends up with Vitalis, a traveling musician, and his troupe of animal entertainers. Together, they travel the country in search for Remi’s real parents, along the way learning the harsh lessons of life. A deeply moving story about friendship, loss and the pursuit of happiness. 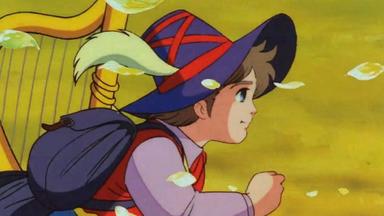 Nobody’s Boy Remi is one of those oldies that I can’t get enough of it along with the Mysterious Cities of Gold. I stop counting the number of time I watched it, but each time I cried like a baby. It’s a series were you get attached to the characters, human or animals, and when one died you can help but feel really sad about it. The series is the anime adaptation of a novel of Hector Marlot (Sans Famille).