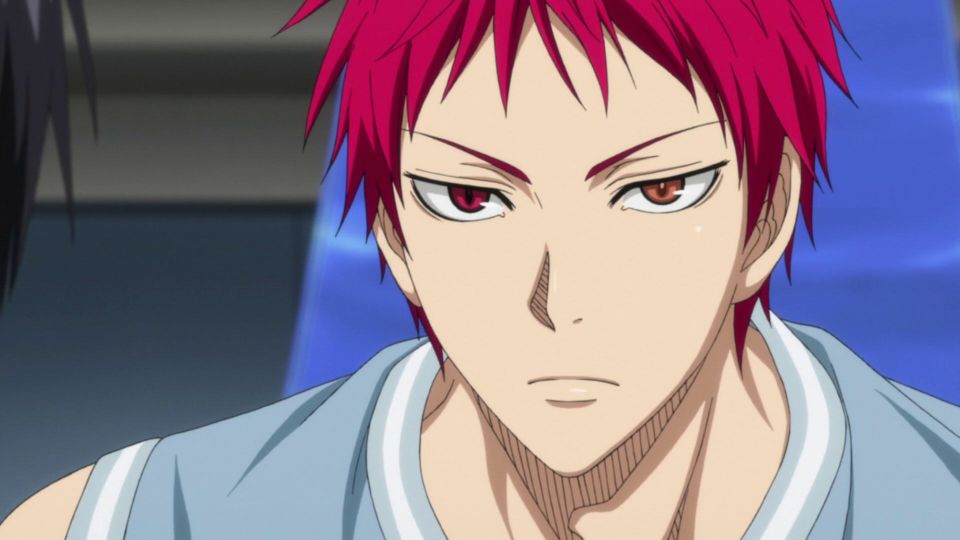 Last week I posted my Top 5 list of favorite blue-haired male characters and the first position wasn’t really a surprise. This week, I decide to go with the opposite color Red.

Before giving you the 5th position, I will take the time to give two Honorable Mentions one goes to Ginti from the anime series Death Parade. While the series is no focused on him it’s still through him the viewer see how the Arbiters work should be done. Ginti is the opposite of Decim and fill really well that role. and the other one Grell Stucliff from Black Butler. Grell are fabulous and over-confident. They does seems to enjoy their job, they would probably rather run after Bassy-chan, however sometimes they will take their job seriously.

Akashi is the ultimate Kuroko’s rival, he was the former captain of Teiko, he is scary, but that is due to his fear of losing. That fear pushed him to develop a second personality, which took over. But while facing Kuroko is came back to his former self, a Akashi who actually enjoy playing basketball.

Mikoto was the Red King during the 1st season of the anime and while he wasn’t there during the 2nd season, he present was still felt through the other character. Mikoto was the opposite of Munataka, if the Blue King was clam and collected, the late Red King had a burning passion in him and had hard time to control his anger.

Kagami Taiga, Taiga like Tiger, the biggest feline, feline with a fire fur. Kagami can be wild like a tiger and heat up like the fire when he is on court. His passion for the sport is admirable. He is a basketball idiot who like to end but is afraid of dog.

Rin use to be my favorite Free! character, but a certain shark whale took the spot, I still really like him tho, see precious shark who pretend to not care about his old friend but he still worry about Makoto and his relation with the ocean. At 1st Rin main goal was to win against Haru but then he realize he needed to set the bar higher and make sure to fulfill his late father’s dream and become a national swimmer.

Crowley Eusford (Seraph of the End)

If Aomine 1st place wasn’t really a surprise with the top blue hair of last week, Crowley 1st place this week shouldn’t be one either since he is pretty much everywhere on my blog. Yes, the main reason why I came to like him it’s because he is quite handsome, but more he was appearing in the manga, more I like him for the character he is. Crowley used to be a human like all the vampire, maybe with the exception of the 1st Progenitor, and was a knight during the crusade, but Ferid kill all his friends and turn him into a vampire. Now Crowley is part of Ferid faction and he is stronger than he pretend to be. When Ferid turned him in a vampire, he didn’t use his blood, but the blood of a former 2nd Progenitor, the same who sired Ferid, in other word Crowley is probably was strong as Ferid which is quite convenient since the only thing that left from his pass life is his will to fight and the enjoyment he gain from fighting stronger opponent. Newest chapter make me believe Crowley his not like the other vampire, his human memory have probably something to do with it.

This was my heated Top 5 male with red hair, next week should be Orange ,or close too, haired boy just not just if I’m doing a top 3 or 5 will depend of who I found.