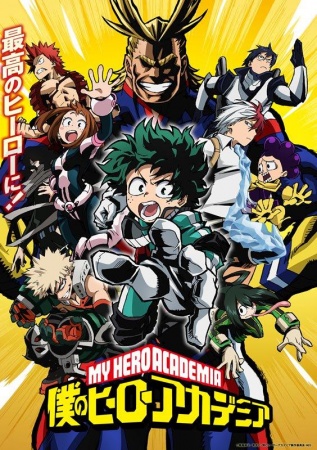 The appearance of “quirks,” newly discovered super powers, has been steadily increasing over the years, with 80 percent of humanity possessing various abilities from manipulation of elements to shapeshifting. This leaves the remainder of the world completely powerless, and Izuku Midoriya is one such individual.

Since he was a child, the ambitious middle schooler has wanted nothing more than to be a hero. Izuku’s unfair fate leaves him admiring heroes and taking notes on them whenever he can. But it seems that his persistence has borne some fruit: Izuku meets the number one hero and his personal idol, All Might. All Might’s quirk is a unique ability that can be inherited, and he has chosen Izuku to be his successor!

Enduring many months of grueling training, Izuku enrolls in UA High, a prestigious high school famous for its excellent hero training program, and this year’s freshmen look especially promising. With his bizarre but talented classmates and the looming threat of a villainous organization, Izuku will soon learn what it really means to be a hero.

Surprise!!!! Boku no Hero Academia – Season 1 is the latest series not coming from the current season I watched. I know I would normally publish a First Impression post when I start a new series, however I couldn’t to it this time…more like I didn’t wanted because to be honest with you that First Impression wouldn’t probably be fair. The first few episode was really bothering me, but some people told me the series was better around the 5th or 6th episode, so I decide to continue watching and until those episode and see if I would continue it. I could have done my impression post at that moment but I guess…I …forget. During the second half of the season I was completely into the series and I just binge-watched it, that’s why there is no First Impression post for this one.

The main reason why I had difficulties with the few first episode was mainly because of Bakugo, now don’t get me wrong I know he is a great fighter and have really good grade, I just don’t like his attitude at all BUT he is still in my top 10 character.

When I began to watch it, I didn’t put my expectation to high, I knew it was a favorite of a lot of anime fan and I already saw lot of GIF and short video, so I have a little idea of what was waiting ahead for me. I already knew a little bit about Midoriya Izuku, what I didn’t knew is how much I would like that little green-haired and root for him. When he cried in front of All Might, it actually really hurt me. I just wanted to give him a big hug and tell him that everything would be alright. His dream need to be protected at all cost. Izuku is not the only character that I liked right away, the series have a lot of interesting character, in fact everyone can find a character to cherish. As for me I have to say Todoroki might end-up taking the first spot. I just like how calm and collect he is, plus he is playing with Ice and Fire, he is hot and cool at the same times isn’t great??

On the story side, it’s the first season and half of it, it’s Izuku training and getting bullied by Bakugo, so I wasn’t expecting much of it, since I already knew Izuku was eventually having a quirk, but I really like the idea quirk can be pass to other people, knowing his quirk come to his idol/hero and seeing him working out to get it, was really nice to watch. Midoriya also try to learn to control it which he have to if he doesn’t want to break his bone each time he use it.

Even if I wasn’t sure in the begging, I really enjoyed watching the 1st season of Boku no Hero Academia and I will certainly watch the 2nd season.

3 thoughts on “My Hero Academia, Season 1” Leave a comment ›

Mel's Universe My Hero Academia, Season 1
Too Good at Goodbyes