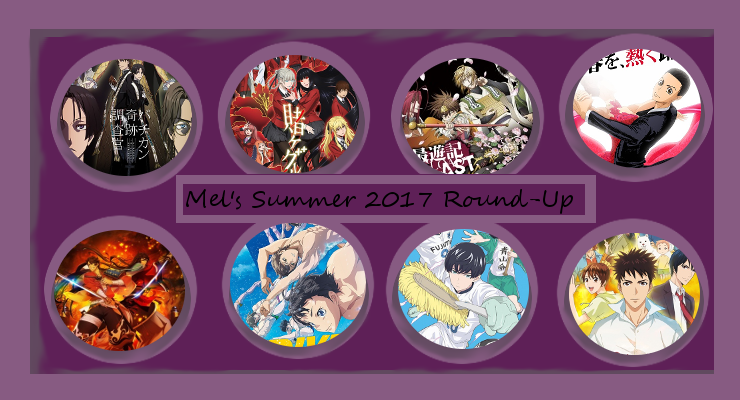 I would really like to explain you clearly why I actually enjoy this anime. The series is Slice of Life anime mixed with Supernatural and a little bit of Mystery. I have to say I’m still failing to see the Mystery in it, not all Supernatural are mystery even more when the event are kind of predictable, but I don’t really care, I mostly watch the series cause I don’t have to use my head. There is no “What with happen next” element and I think it’s good to have at least one title like that just to avoid the headache after watching more thrilling anime. Will I recommend this series to everyone, maybe not, unless they are looking for something easy to watch. That being said, I was quite happy when the announcement of the series continuing during the fall season came out.

Welcome to the Ballroom

After reading a lot of post about it, I finally decide to give it a try and I like most of it. There is a lot of good element about the series BUT I was disappointed by the number of still frame we found in an anime about dance competition. I would really like to see more, we know they can give good animated scene,they show of some, so why they doesn’t show more of it is still a mystery to me. I liked what I saw, but not enough to finish the series. Guess my interest for some of the character is not enough to keep me going through the remaining episode.

You have to know, I didn’t watch the previous series from the same franchise. However the great thing is I didn’t have to, at least with Reload Blast, the series gave enough information to let us know what was happening and what Sanzo party wanted to do. Of course I will eventually watch what come before, since from the three series I wasn’t planning to watch, this one is probably my favorite. Of course there is pretty boy in it, thus to me it’s a reason good enough to give it a look, but beyond that I really like the interaction between them.

Now from what I was already planning to watch…

I was really looking forward to watch this one, but I really add hard time to get on it, there was even moment where I thought of dropping it, but I watch it until the end. I’m not totally disappointed, since I loved the visual and the use of color, but I wouldn’t have watch twelve more episode of it.

Dive!! is an other series I was looking forward too, diving competition is one of the few I really like to watch during the Olympic, so I got really excited when I knew they where airing a series on the subject. The plot is interesting, to avoid a diving club to close, one of the member have to become an Olympic representative. It’s really simple, but it’s an impressive sport…if only the visual department was actually able to deliver that. They probably but all their time on the water reflection than anything else, cause yes that reflection is great but it’s stop there. I was a little bit disappointed. I feel like it really missed the excitement effect like other sport anime have, I wasn’t thrilled by the competition, even less by the last one.

This series is really similar to “Haven’t You Heard? I’m Sakamoto” and “Tanaka-kun is Always Listless” except this one have a sport background, which is soccer. While I really enjoy the two first, I start to grew tired of Clean Freak! Aoyama-kun around the 7th episode. I’ll take a second season of with Sakamoto and Tanaka anytime, but one season with Aoyama is enough for me.

That’s an other anime I quite enjoy and I don’t know why.  If Elegant Yokai Apartment Life lack of mysteries, Vatican Miracle Examiner have maybe… too much. Some episode almost gave me headache just cause of the amount of information given.  One thing I enjoy is the clear difference between the two lead. I like how they try to include the science part in the series. For a long time, people tend to believe the Vatican was against all for of science, but it was proven more than once it wasn’t the case. The fact the present a character that validate the information with the help of the science instead of believing only what his eyes show him, his interesting. Now the series is over, I realize I will miss Lauren tho…I wishes we saw him more.

The easier way to describe this anime is to say it’s like “Hanamaru” but focused on fight and action, instead of how the sword were living in the citadel. So if you are looking for an anime with a clear and define plot with a real villain, this anime is not for you since there is no…plot. But if you enjoyed “Hanamaru” and you like action yo might like Katsugeki. I was looking forward that show and I wasn’t disappointed at all, it was probably my favorite from the season. Plus the visual are great.

Here end my seasonal round-up for Summer 2017. I’m quite impressed myself, I manage to watch most of the series I was planning to watch until the end. Now looking forward the Fall 2017, just waiting for Crunchyroll to post their simulcast lineup before writing my watch list post, since this time I really determined to watch only legally, at least when in come to seasonal series.

I already know some I want to check out: Black Clover, Code Realize ~Guardian of Rebirth~, Dies Irae, Juni Taisen: Zodia War, Kino’s Journey and The Ancient Magnus’ Bride. Those are the one I know CR will stream, maybe more will be added later.

See you next time!!