Welcome back to a new edition of K-Friday.

My first idea for this week was other post that made you look into the kpop fandom, but I felt like I should give you something a little be more light and thus the reason why you see those two beautiful specimens. 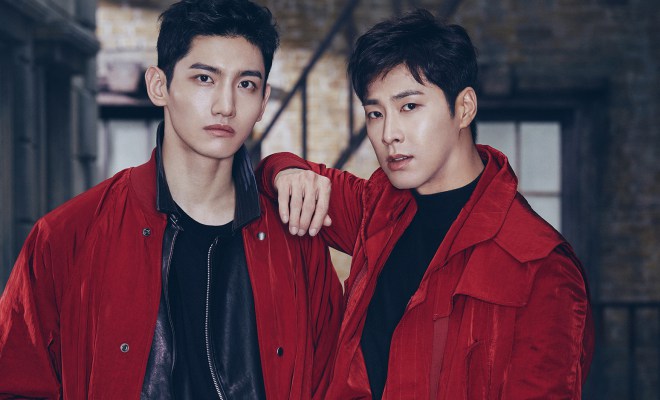 It should normally be five, but due to some reason I would like to not talk about (but I still will in the text below just keep reading) now they are only two.

Once upon a time, the almighty SM Entertainment debut a five-member boy group called Dong Bang Shin Ki (The Rising God of the East, I will forever be amazed by Lee SooMan news idea), DBSK for short, they are also know as Tong Vfang Xien Qi (aka TVXQ) in China or Tohoshinki in Japan (some anime fan might know that name since the group (as 5) sang some anime opening) . The group, Yunho, Changmin, Jaejoong, Junsu and Yoochun, really had everything talent (*cough*) and look (nod nod). However since every good thing need to end one day, three of the members (Jaejoong, Junsu and Yoochun), decided their contract was unfair and wanted to nullify it, but SM didn’t want to and decide to file lawsuit against the three. The trio eventually won and now they are know was JYJ. I will not talk about what I think about the lawsuit, I gonna keep that for the other post I was planning. So know TVXQ is a duo and one hell of a duo.

I think the sound of the group, change with the member line-up, to be honest it’s probably easier to produce, compose song for a duo than for a group with five members. I have to say that I much prefer them as a duo than as a quintet (sorry Cassie I do not wish seeing DB5K), I do like Jaejoong and Junsu voice, but I think that Yunho and Chagmin are perfectly fine just as two (anyway, it’s not like if SM will let them reunite anytime soon for a special release)

Since their comeback as a duo in March 2011 the duo released four studio album, Keep Your Head Down in March 2011, Catch Me in September 2012 (followed by the repackage Humanoid a few months later), Tense in January 2014 ( the repackage, Spellbound, was released a month after) and after they have both complete their mandatory military service, New Chapter #1: The Chance of Love in March 2018 and each of them did pretty well on the Korean chart (Gaon).

Adding to those four albums there a few special album, the latest being New Chapter #2: The Truth of Love released in December 2018, with “Truth” as lead single.

TVXQ are the first Korean idol group invited to perform at the Kōhaku Uta Gassen, Japan’s most prestigious New Year Eve’s music festival. They performed there three times, from 2008 to 2011. TVXQ are the first Korean music group to headline their own concert at the Tokyo Dome (The Secret Code Tour in 2009), the first foreign group to embark on a five-Dome tour in Japan (Time Tour in 2013) and the first foreign artists to perform at the Nissan Stadium (Time Tour). Their 2017 Begin Again Tour was the highest-attended tour ever held by a foreign music act, bringing over a million people.

One Piece fan might know them, since the group (as five) sang the 10th (“We Are“) and 11th (“Share the World“) opening of the series. They also sang the 18th ending, “Asu wa Kurukara” (明日は来るから)

It’s not the first time I talk about the group, I already did it in December 2016 with the Kpop in Anime post series. In that post I had share some of my favorite song from the group and now it’s is time to share some more. I will include only the song sang as duo since it’s the way they are promoting now. However I can still point you some great song they sang as five, like “Mirotic” and “Rising Sun“.

TVXQ, Dong Bang Shin Ki or whatever the name you want to call them, is a group what will name get old, their song are, at least to me, pleasant to listen to and they are one of the few group that I’m always existed to see having a comeback.

Did you know them prior reading this post? Listen any of their song? Let me know in the comment below!