By now you should know what is OWLS, but if you are new around here let me explain what is this awesome group.

OWLS stand for Otaku Warrior for Liberty and Self-Respect, we are a group of blogger and vlogger who promote the acceptance of everyone regardless of their ethnicity, religion, gender, sexual orientation and disabilities. Each month with the help of the pop-culture, we explore the theme given by Lyn our Chief Creative Officer.

Last month the prompt was “ADORE” which was really fitting for February. For March is “Feminine”

“In honor of Women’s History Month, the OWLS bloggers will explore the concepts of femininity and feminism. We each have our own definition of these two terms and we will explore our definitions using “feminine” characters from various pop culture fandoms. We will discuss how these characters are “feminine” or show signs of a feminist agenda. We will also share our personal stories about the amazing women that supported us in our lives as well as sharing experiences involving women’s rights, oppression within the patriarchy, and/or issues of growing up as a woman or having a feminine persona.”

As always, when I see what is the new theme, I browse the series that I watched to see if I will take part of the tour or not, stopping at every title thinking about how I could apply the theme to it. As you see, I didn’t had to go down to far in the alphabet to find the series I will use for this month. In fact, I shouldn’t even had to thinking it since Fullmetal Alchemist have one of the most interesting females cast.

While the series is following the story of Ed and Al in their quest on the Philosopher’s Stone while unveiling a corrupted government, the series also have a great feminine cast as support characters.

The first strong female character we meet in the series is Edward and Alphonse childhood friend, Winry Rockbell. She living in the house next door and after the death of Ed and Al mother, she is more like a family for the boys. Her house is a safe place for them to stay.

Like her grandmother Pinako, the energetic young girl make prosthetic automail, she made Ed prosthetic and is really proud of it. Winry is quick to kick Ed’s ass if he doesn’t take care of it.

She doesn’t need man to get the thing she want, she is quite independent and she really want to get better at what she does. This why she decided to stay in Rush Valley when the trio was on their way for Dublith, there she would be able to learn new technique.

She also have a strong sense of duties, which she take from her parent who were doctors, killed during the Ishval war. This sense of duties helped a lot when she had to help for a baby delivery and this is why she took care of Scar injuries despite knowing that he was the one who killed her parents. In both case she knew she had to do it.

While Winry can be strong and independent, she also have a softer side, a side that worries about the brothers, a side that allow her to cry for them.

Izumi is/was the brother teacher, she is the one who taught alchemy to the young boy. The took them with her after visiting Resembool. The dam was menacing to break and she use her alchemy to solidify it. After seeing that Ed and Al begged her to teach them, even if at first she didn’t wanted the boys puppy eyes and their situation made her change her mind. Even if she is their teacher even if she much rather being see as their equal now, Izumi was more than their teacher during that time, she was almost like a mother figure, a strict mother who only want the best for her kids, she can also be really scary, no wonder Ed and Al were afraid to go back to see her after what they done.

Not only she is a highly skilled alchemist, but Izumi is also physically strong

Izumi can be strict and scary, but she have a maternal side that pushed her to take care of the boys and help the kid of her neighborhood. She also care for the people she love, Izumi will get your head if you hurt them.

Being in the military is hard, being in Amestris military is harder so for a woman to be able to get a high rank like Major General, you need to grow some balls and Olivier Mira Armstrong have them. She goes by the motto of “Survival of the Fittest” and in an environment surrounded by men she needed to have the character in take to lead them. Major General Armstrong is a the head of Fort Briggs which is located in the northern region of the country. Is an unfriendly region by the border when snowstorm are the normal weather.

She set her mark by getting up the military ladder with her skills and commanding presence . She is trusted her men, they know she will lead them in the battle without any fear. She can be really harsh with her subordinated and merciless with her enemies.

The stoic lieutenant Hawkeyes, the shadow of the Colonel Mustang. Where Mustang goes she goes, he is the reason why she got into the military in the first place, to protect him from himself.

The is loyal to Mustang and would lay her life down for him without any second thoughts, she is Mustang most trusty subordinate but she is also the one that have to kill him if he wander off his goals and start using his alchemy for bad deeds

Hawkeyes can be really strict making sure everything is made in order but she also have a really soft side, a side she show to younger people like the Elric brother and Winry, a side that can be seen with her interaction with her dog Black Hayate 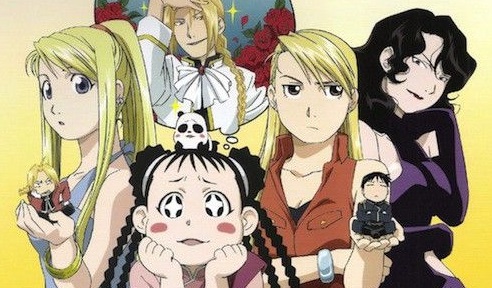 I could have also talk about Lust, I could have mentioned Martel or even Lan Fan and Mei Chang. Like the great the four ladies mentioned above, they are all great female characters, even the 2003 adaptation give us original character like Psiren and Dante would have been worth to be talk about

There are a lot of great characters in Fullmetal Alchemist and among that great cast you can find a lot a great female character. This is one of the reason why I enjoyed the series so much, cause of the female cast that is as important as the male one for the story.

This was my OWLS post for the March tour, don’t forget to read Lyn post that was published before me on the 27th and make sure to look out for YumeDeku post that should go out on the 29th.

You can find the complete tour schedule here.