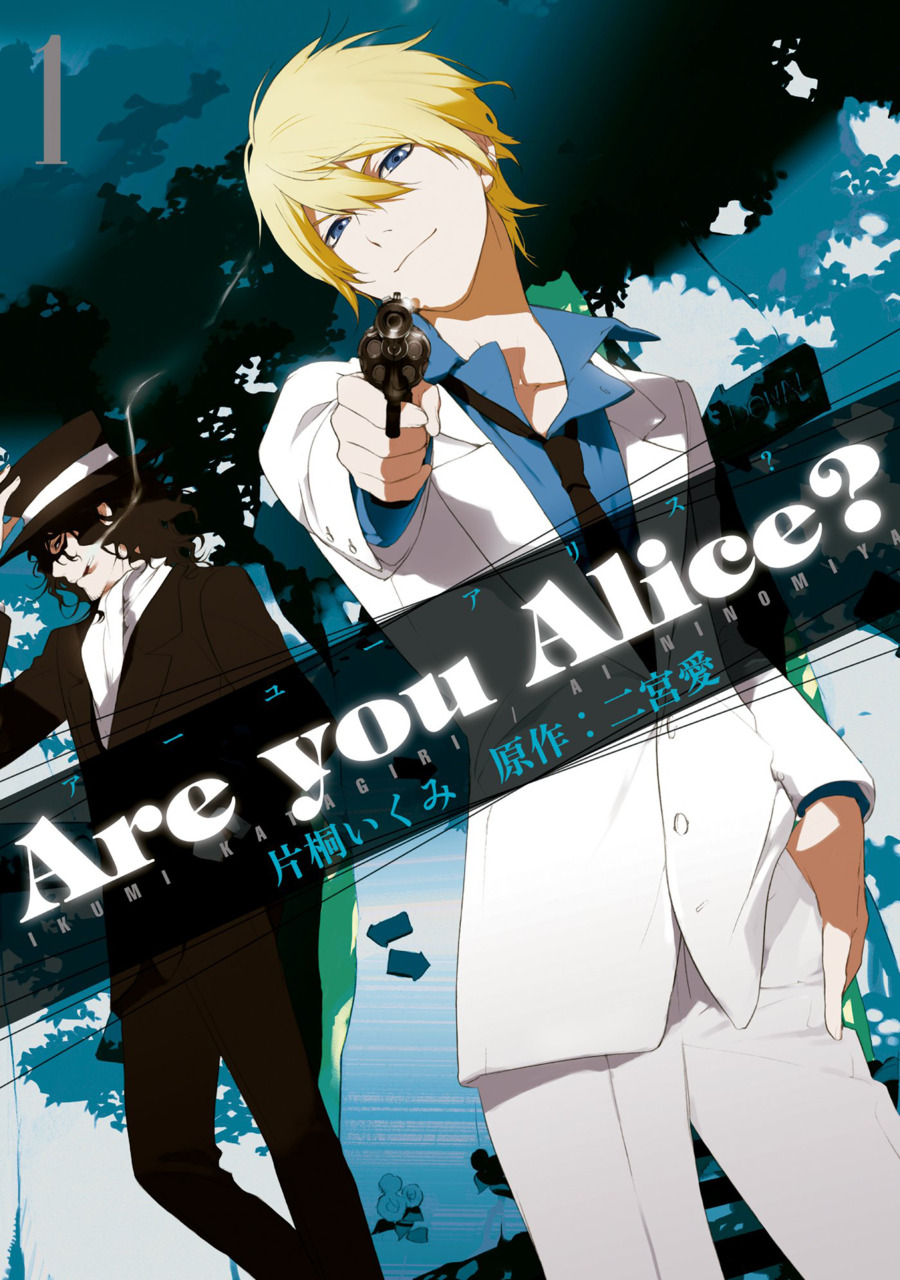 As you know, a few weeks ago I finally got my hands on the last volume of the manga series “Are You Alice?” , I was quite excited to have it since that would mean that I will finally resume the series. You see the series got really complex and I was really confused each time a new volumes was releases. I needed to read the previous volumes and even there it was more like “WTH is going on?”, so I decided to put the series on hold and wait to have all the volumes on hand, this way I could read it from 1 to 12 without having to wait one or two months between each.

In the beginning, I wasn’t quite sure if I should just read them all and write only one post about the series or I do one post per volume and still do a final review at the end. I did already post about the series back in 2016, you can read it here, I edited the title and added “First Impression” this way the post will not be mistaken for a full review of the series.

As you can see by the title I decided to go with the second option, I think this way it will allow be to have a better understanding of what is going on, the series got really complex more as it was going.

Just a little warning before jumping into this post, I will try to keep in spoiler free, but I can’t guarantee anything. If there is any spoilers, it would probably mild spoilers, still crossing fingers to add write any tho. 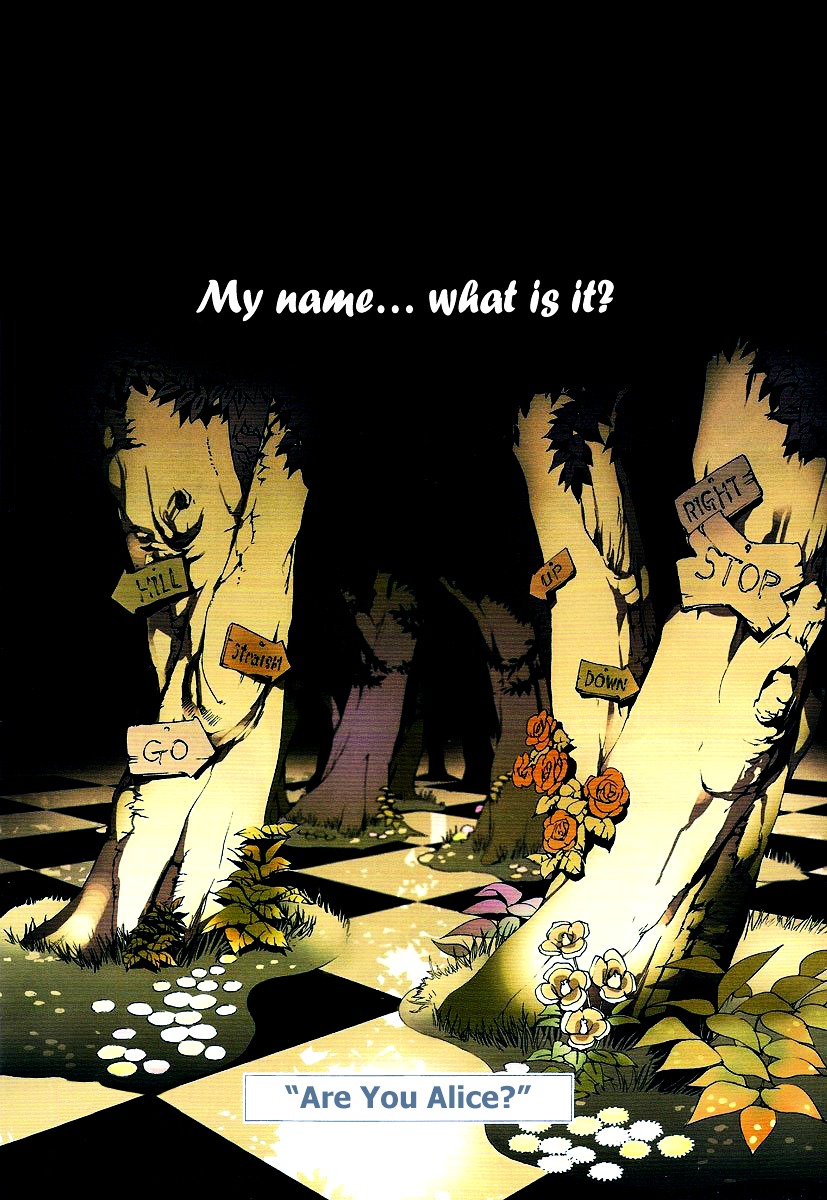 The volume open on a meeting between the Mad Hatter and the Queen of Hearts, they are discussing about the Cheshire Cat and their desire to find a new “Alice2 because they need Alice to open a door. Which door it doesn’t say. Then we have the entry of the main protagonist, a young man later known as Alice 89th (he is the 89th Alice to be brought in Wonderland, he is walking in the street of Wonderland surrounded by people and he doesn’t seem quite sure to know what he is doing there until the Cheshire Cat come and give him a name “Alice”, until know he did had any name.

While everything appears like the Wonderland of Lewis Carroll story, I mean there is the Mad Hatter, the Queen of Heart and Cheshire, the world seems different, like if it was a place where people who died or ready to die go. Cheshire mention to get in that world, you need to leave behind you your name and your past, if you think about it, if you look behind you Regrets will come to get you.

Mad Hatter appears and completely ignored Cheshire the latter explains that is because he is “Invisible” in Hatter eyes.

Later on Alice meet with the Queen of Heart where we get a little more explanation about how this Wonderland works. It appears that the Queen have the ability to give a role to each character of the Wonderland and they can only do what they are told. If they disobey they are executed. 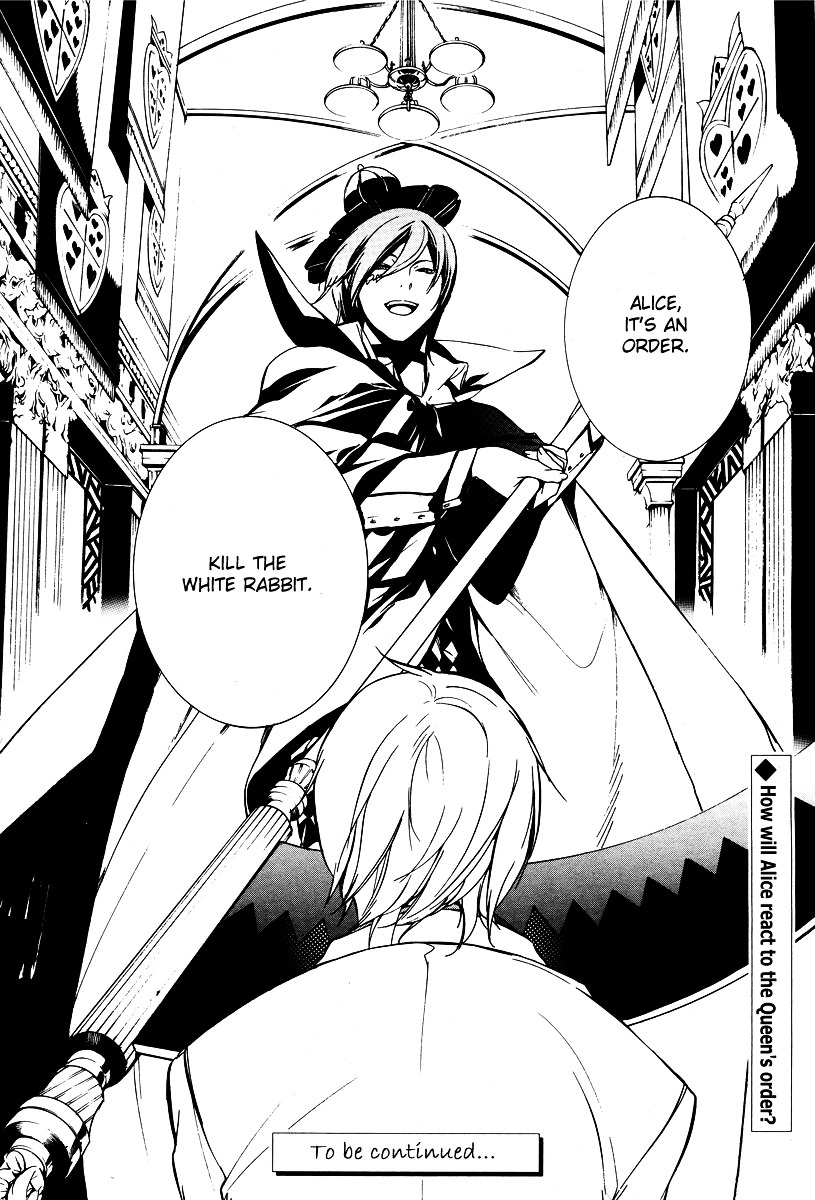 After confirming Alice is Alice, the Queen give him his role, which is to kill the White Rabbit, Alice can only kill the White Rabbit, which means even he tries to killer the Queen or the Mad Hatter it will not work. Before accepting his role, Alice makes a deal with the Queen, if he succeeds he can live freely in Wonderland without any restrictions. Toward the end of the volume, Alice meet the Duchess which change something in him after witnessing the Duchess being taken away by the Duke, a Mass of Distortion charge of cleaning Wonderland from the Regrets.

If I (try) make abstraction of what I know of the other volumes, I have to say the first volume make sure to stay vague about what is going on even if we get an apparent main goal for the series which is to kill the White Rabbit, but we don’t know why he needs to be killed. We have a glimpse of him and a young lady sitting in a chair and from what we read/see, we can tell the White Rabbit doesn’t approve this new Alice since he is not the one he brought him to Wonderland.

First volume of series usually serves at introducing the world to the reader and the first volume of “Are You Alice?” doesn’t make exception, It introduces to us, the reader, a new Wonderland quite different from the one imagined by Lewis Carroll and give us a general plot without telling us too much about what will come next.

Now if we take a look at the character, again if I don’t take in consideration the volumes to come, the most interesting character is the Cheshire Cat since he is the only one who is playing a double game. In appearance he seems to go with the flow of the story, but in backstage it’s the opposite, he is the one who tries to change the most that new Wonderland. Alice 89th is … attractive I guess, he might annoy some of you since he doesn’t look like having any depth and motivation, he is just there, some might say he is a character driven by the plot, when Cheshire drive the plot if that makes sense, same for the Mad Hatter and the other characters we meet in the first volume.

If we take a quick look at the visual, I really like it, not for the attractive male cast (okay maybe a little, it wouldn’t be me if I didn’t pay attention to it) but because each of the characters have a little something that makes them who they are. When you are familiar with the original story, you don’t have to wait for their introduction to know who they are, the background doesn’t seem detailed as the character, but this just makes them stand out more.

The one thing realize on my second reading of the volumes, now knowing what I know about what will happen later in the story, you really have to read everything and pay attention to the details, sometimes a simple onomatopoeia can give you some hints about future element of the story, so you can guess that I will read every little detail of the other volumes too.

From the first volume I can tell the story will have a slow development and before you say that I can tell that cause I finish it, this is not the case. I read the series up to volume 7 (or 8) then wait for the series to be complete and then read the two lasts volumes. In other words I have no clue what is happening during 5 (or 4) I will be discovering it at the same time as you . From the way the series in introducing thing in that first volume, you can tell the story will be a slow pace story. There is not much happening in that first volume.

I’m quite excited to read the series and see what happened in the volumes that I haven’t read yet and I know I will enjoy reading again the other volumes, as much as I enjoyed reading the first one again.