Hope you are all going well!

Been a right? Some of you might even be surprised to see me post something, other might be excited and I would say to those, don’t, not planning to come back… at least not yet; my plan is to coming back somewhere next year, so rest assured the blog will not die

The reason why I decided to post this update is to dust off the blog a little, I see some spider web here and there.

Some of you might know that I somehow lost my passion for my blog, I didn’t have the will to write anything, while that interest is not fully back, I do have a slight idea of one I’m planning for the future of my blog.

First I might rename it, I have one in mine and when the time will come I might ask you your opinion about it, you can even say it now, the comment section is there for a reason.

I also want to do a big cleaning.

At first I thought I would just start from scratch, but I just don’t wanna lose all the followers (569 WP followers at the moment of writing this post) I gained with time, however, I feel like my stats are not real.

If you follow me on Twitter (if not here your chance), you probably saw me mentioning it a few times, all my views are coming from the doujinshi that I featured on the blog. 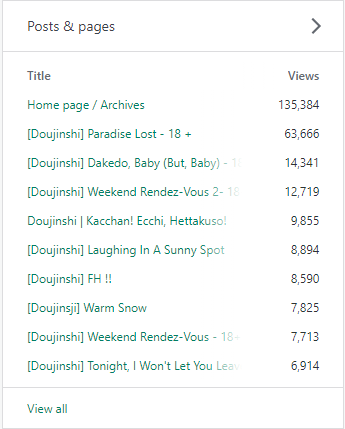 My blog is not only a doujin blog, it’s an anime and manga with a dash of K-pop and video game blog, but right now it doesn’t feel like that and I want to change that and for that I need to delete all the doujinshi posts; I know that I will lose all my views, but at least the stats will really reflect what my blog is and how people are interested in reading it.

I will also delete all the fanfic that I posted on the blog since I post most of them on Archives of our own, for those of you who could be interested in reading them you can find them here; just make sure to look at the tag before reading, if you don’t you might have some surprises.

I might deleted other post and reorganized the tag and categories, I’ll will tell you more about it when the time will come.

This is pretty much it for now, the next time you will see me post anything is when I will prepare my come back.

Want to say a big thank you to everyone who is still following me despite my lack of post.

Today’s post is really more of a rant than an actual post. I really need to talk about it somewhere and since it’s related to anime/manga and kpop I decide to do it on my blog.

I already quickly talked about the issue on Twitter, but I feel like I need more than 240 characters to really talk about.

END_OF_DOCUMENT_TOKEN_TO_BE_REPLACED

It probably happened to everyone at least once, we all at least once came to like something or someone after being repeatedly exposed to it. We might have been indifferent in the beginning, not paying too much attention to that thing or person (or character, we might even be cold toward it, sometimes hate it.

But after seeing it, hearing it, tasting it, we start to change your mind on the subject, we gradually warmed up to it, talking more about it, looking for piece of information related to it, cause after all only the fools don’t change their minds.

The mere-exposure effect is how the psychologist call the phenomenon leading one to develop a preference, to have a change of heart to thing that we become familiar with. It has been demonstrated that more often a person is seen by someone, the more pleasing and likeable that person appears to be. The effect also been demonstrated with various thing like words, paintings, pictures and sound (1)

If I know the existence of that phenomenon, if I know the name of it, it’s because I was subjected to it more than once.

When the kpop girl group SNSD (Girl’s Generation) had their comeback in 2013 with the track “I Got a Boy” I wasn’t super thrilled, I didn’t liked the song, I was really wondering why one of the top girl group of the time was coming back with this horrendous mash-up song. To me the track didn’t flow well, there was too many thing happening in one song. At the time I know I wasn’t the only one who thought that, even the member of the group wasn’t sure of what to think about the song. However after listening to it again and again just for the sake of torturing myself and trying to understand why people were enjoying it so much, I came to like it myself and it’s is now safe to say that “I Got A Boy” is one of my favorite track of the group.

Some anime and manga characters also have the same effect on me. If in the beginning, I wasn’t attracted toward them, more I was seeing them in fan art, doujinshi or simply GIF and official picture, more I was pulled toward them, looking for picture/fan art of them, enjoying doujinshi with them.

One of this case, I already mentioned it in a post that I wrote in February 2017, is Imayoshi Shouichi, character of Kuroko no Basuke, captain of the basketball team of Touou Academy. In the anime series, while I thought it was kind of cute, it wasn’t more than that, he wasn’t even on any top character at the moment, however after seeing him popping up in my endless research of various Aomine fanart I came to enjoy seeing him to the point I need to find art with only him on it.

This is also the case of the powerful wing spiker and captain of Shiratorizawa, Ushijima Wakatoshi from Haikyuu!!. When I first saw him in the anime, I wanted to punch him and his feeling of superiority, his way of look down on people, however thank to all the fanart and doujinshi I warmed up to that idiot, I warmed up to the point I absolutely needed his nendoroid when it came out.

The more recent case that  King Explosion idiot that his Bakugo Katsuki from My Hero Academia, and fun thing, I’m not the only one who is struggling what that moron. My dear friend Zel also had a sudden change of heart concerning that bully. If my change of mind was cause by all the sweet and fluffy doujinshi I read with him paired with either Kirishima or Midorya, Zel it’s because she deeply fell in the pit of hell that is fan fiction, of cause all the fan art depicting him incredibly hot, sexy or just cute and fluffy didn’t help our case.

I could give you a lot more example of what the mere-exposure effect did to me, how it pushed me to use more and more certains Pokemons while playing when before I was catching them just for the sake of completing my pokedex.

This phenomenon is the same that make something or someone growing on you. If at first you just acknowledged the fact that thing or person /character exists, more you are exposed to it, more it grow on you and more you like it.

The mere-exposure effect, is that one thing that like to screw-up with your mind, to make you change your mind regarding stuff you didn’t enjoy you was just indifferent in the beginning.

Hi everyone!! It is now the time of the year where I’m supposed to reflect about what happen during 2017 and what I hope for 2018.

END_OF_DOCUMENT_TOKEN_TO_BE_REPLACED 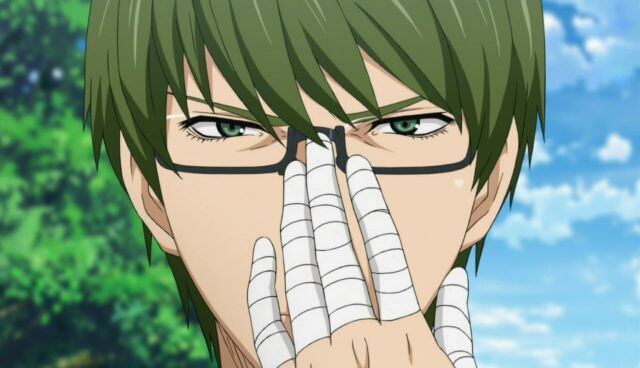 END_OF_DOCUMENT_TOKEN_TO_BE_REPLACED

Sakomoto (Haven’t you heard,I’m Sakamoto), Midorima Shintarou (Kuroko no Basuke) and Tsukishima Kei (Haikyuu!!) have all something in common, they are all megane. Megane, beautiful being wearing glasses. I don’t know why, but each time I sees one in anime, most of the time my knees become weaker and by heart start racing. I can’t help but fall in love with him.

END_OF_DOCUMENT_TOKEN_TO_BE_REPLACED

2016 was the years I make a comeback into the anime world. In fact I never really left, since I continue reading manga, my interest was still there, I just needed a little help to fall into the pit again.

END_OF_DOCUMENT_TOKEN_TO_BE_REPLACED

Since I started to drown myself in the anime world once again, I found few series that actually make me think about more than what we see or read. Most of the series that I read or watched, gave lot of information within the first twenty or thirty chapters, or around the middle of the season. In fact, I only found one series that doesn’t give a lot of information about the motive of some of the characters or the reason explaining why some event happen or thing exist. This series is Seraph of the End  (Owari no Serafu). Even after two seasons and 50 chapters we still doesn’t that is exactly the Seraph gene, how it came to exist or where the virus came from.